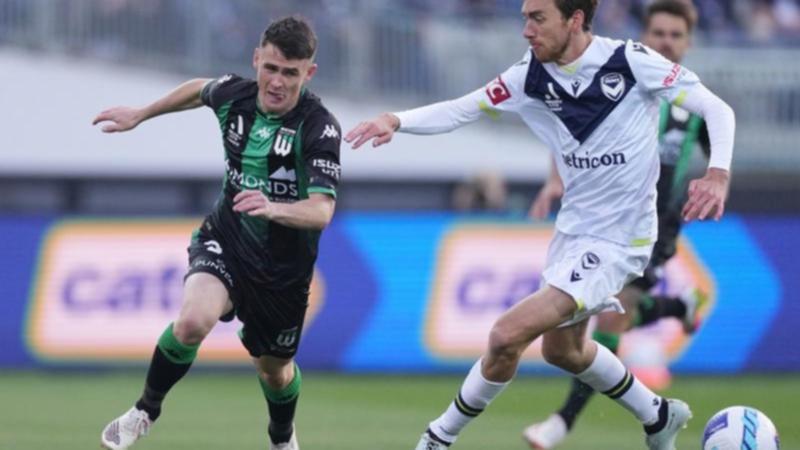 Western United have snared their first A-League Men victory under John Aloisi with recruit Dylan Wenzel-Halls scoring in a scrappy 1-0 triumph over an under-strength Perth Glory.

Former Brisbane striker Wenzel-Halls was benched for Aleksandar Prijovic but coach Aloisi brought him on in the 70th minute and he provided the winner eight minutes later at AAMI Park on Friday night.

Perth’s star recruit Daniel Sturridge was expected to build on the handful of minutes he had off the bench on debut against Adelaide but wasn’t even listed on the team sheet.

But United were unable to take early advantage.

The best chance of the first half came in the 20th minute when United skipper Alessandro Diamanti tried his luck with an ambitious shot from just inside his own half, forcing Glory goalkeeper Brad Jones to backtrack and make a last-ditch save.

After half-time, Glory star Bruno Fornaroli had a chance to snatch the lead in the 51st but was well denied by Jamie Young, who advanced to claim the ball.

The game sparked to life when Wenzel-Halls was introduced for Prijovic.

Shortly after, Diamanti slipped a clever ball through to Connor Pain, who burst down the wing, cut towards the goal line then sent a cross skidding towards goal.

The ball skidded past Jones, barely stayed in play then deflected off the far post and into the path of Wenzel-Halls, who tapped home the easiest of finishes.

Some deft defensive work from Leo Lacroix foiled a Perth attack late in the game and United held on for all three points.