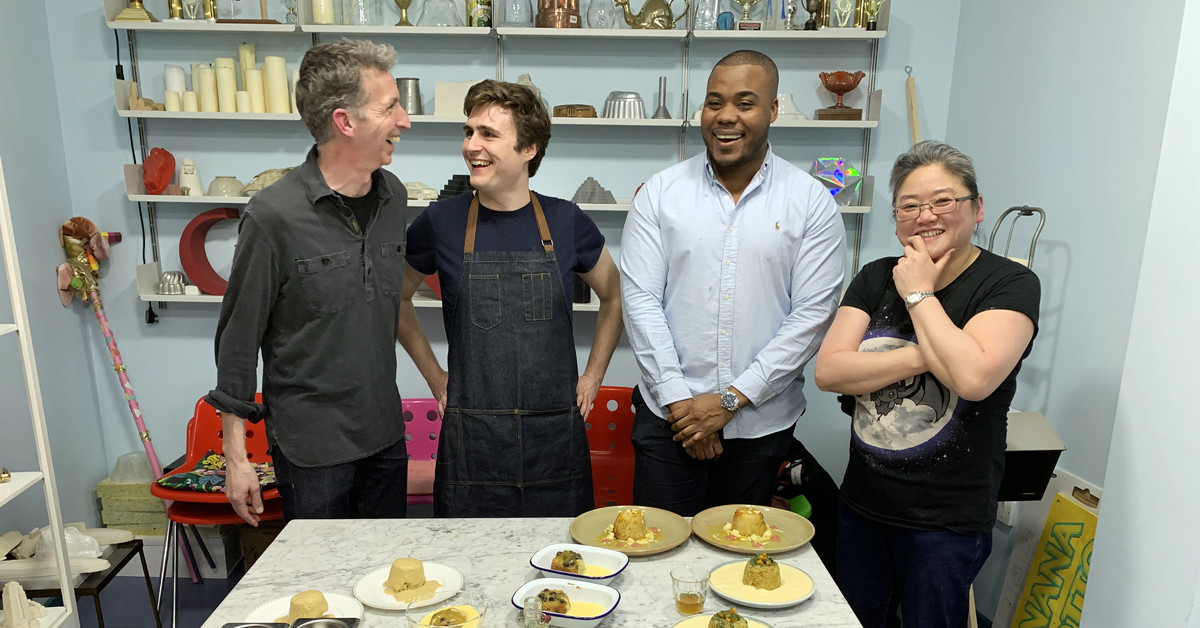 It’s a near-annual tradition every time The Great British Bake-Off returns: We all celebrate the balm it slathers over everyday life, get inordinately interested in dishes we’d previously never heard of (dampfnudel? sure!), and then Desserts Week and/or Pudding Week hit the calendar and confusion ensues. I thought every dessert in the U.K. was called a pudding? What’s the difference, then? Why doesn’t that pudding look like the pudding we know in the States? And what in god’s name would lead anyone to name a dessert featured in a series four GBBO episode a “spotted dick”?

To unpack all of these essential questions, three beloved Bake-Off alums — Tom Gilliford, Selasi Gbormittah, and Yan Tsou — joined the Gastropod crew and one ringer American baker, Tim Buntel, in a mini-bake-off challenge focusing on all things pudding. The four bakers tackle a one-dish challenge to make the best spotted dick, a quintessentially British steamed pudding traditionally made with flour, sugar, dried fruit (these are ultimately the “spots” that appear within), suet as the main moisture agent, and custard that’s served alongside the final baked product. But as to be expected from a group of bakers indoctrinated by the need to come up with a Signature Bake every single week, each uses the traditional recipe as a jumping-off point. Tom gets boozy with his custard, Yan re-attempts the flavor combination that booted her off her season, and Selasi’s laid-back approach to baking resurfaces again. After a season of GBBO that felt slightly off in its approach, it’s a Bake-Off return to basics you didn’t know you needed:

As with all other Gastropod episodes, hosts Cynthia Graber and Nicola Twilley take a deep dive into the history, answering the flurry of original questions that surfaces alongside each Pudding Week. So what makes a pudding a pudding, you ask? Ultimately, puddings can be savory or sweet, with haggis being the mother of all puddings; nowadays though, many agree a pudding is something sweet, created by steaming that’s part of the cooking process. “While all desserts can be pudding, not all puddings can be dessert,” says Regula Ysewijn, author of The National Trust Book of Puddings.

And as the four bakers discover, those old-school steaming methods, when combined with a modern and sometimes unexpected approach, can yield sweetly delicious results. No spoilers here, but to recreate the top two recipes in the Great Gastropod Pudding-Off, head over to the Gastropod website.