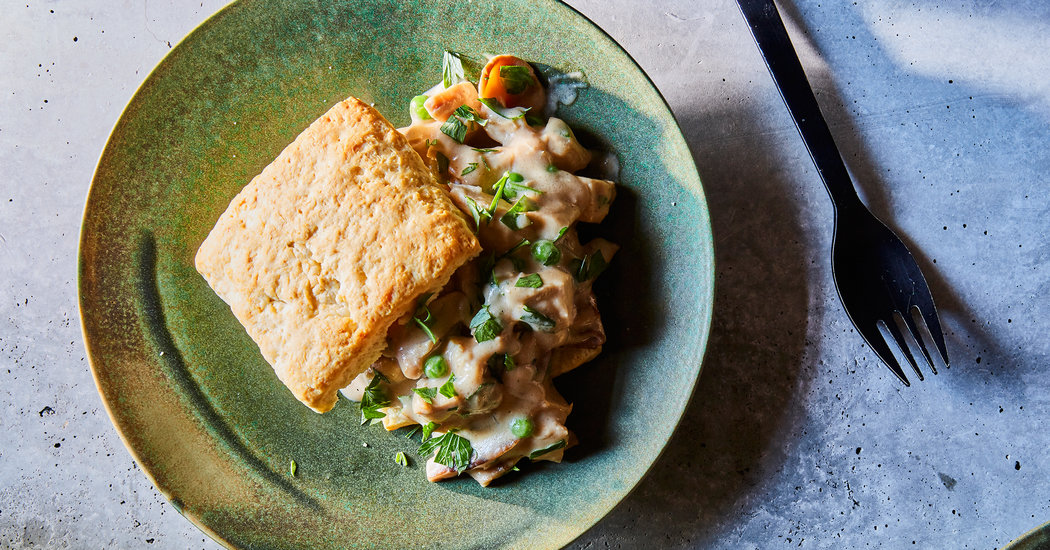 Good morning. It’s Boxing Day across the Commonwealth, a holiday of mysterious origins most commonly thought to have come out of an upper-class tradition of offering a day off and small gifts to servants and tradespeople on the day after Christmas. (For dinner, sausage rolls, presumably prepared by the cooks before their departures for home.) It’s mostly a shopping holiday now, though: Britain’s Black Friday, with sales galore along the High Street. Monoculture may be coming for us all. But it’s not here yet!

Here in America, I hope some of us will be eating holiday leftovers: these lovely ham buns, say, or turkey à la king (above). Others will be celebrating the first night of Kwanzaa, which runs until New Year’s Day. Of course we have loads of recipes for that.

Tonight I might turn to a no-recipe recipe with the remains of my corned beef: a hash of leftover shredded beef, shredded potatoes, some chopped white onion and red pepper, all sautéed in butter until soft and crisp at the edges. Then I’ll divot the hash and crack some eggs into the depressions, bake them in the oven until set, and eat with a fork, straight out of the pan, all of us crowded around the kitchen island like pigs at a trough. (Alternatively, you could make Irish tacos and eat at a table, like civilized folks.)

But let’s say you have no leftovers to repurpose. I might recommend, among other things, that today could be the day for spicy and tingly beef. You won’t be sorry.

On Monday, I think it’d be nice to tuck into this creamy leek and parsnip soup. It has, as David Tanis notes in his introduction to the recipe, “a quiet charm.”

For Tuesday’s meal, here’s a new one from Melissa Clark: wine-braised chicken with mushrooms and leeks, simple and delicious.

A big roast vegetable for dinner on Wednesday? Yes, I think so: whole roasted cauliflower with almond-herb sauce, a modern classic that Julia Moskin picked up from the California-based chef and cooking teacher Joanne Weir.

On Thursday evening, really on any evening, I like Yewande Komolafe’s crispy tofu with cashews and blistered snap peas.

And then on Friday, New Year’s Eve, let’s get started on our celebration of 2022 with a festive plate of shrimp and grits, with a side bowl of stewed black-eyed peas.

Thousands and thousands more recipes to cook this week are waiting for you on New York Times Cooking, at least so long as you have a subscription to the site and apps. I know that chafes for some. But subscriptions support our work. They allow it to continue. If you haven’t already, I hope you will consider subscribing today. Thank you.

And as always, please write for help if you run into any issues in the kitchen or with our technology. We’re at cookingcare@nytimes.com. Someone will get back to you.

Now, it’s nothing to do with agave syrup or the sizzle of bacon in a pan, but I liked this story in Alaska magazine, by Amanda Compton, about the Tsimshian artist David R. Boxley and the totem poles he is carving to mark the entrance to the tribal veterans cemetery in Metlakatla, on Annette Island at the very southern edge of Alaska. It is the only Tsimshian community in the state.

In the Washington Post, Tom Sietsema made a case for fine dining in the District of Columbia.

You know Joni Mitchell’s “Carey,” from her 1971 album, “Blue”? Kate Mossman tracked down the “mean old daddy” at the center of the song, Cary Raditz, for the New Statesman. Those hippies really were something. It’s a lot.