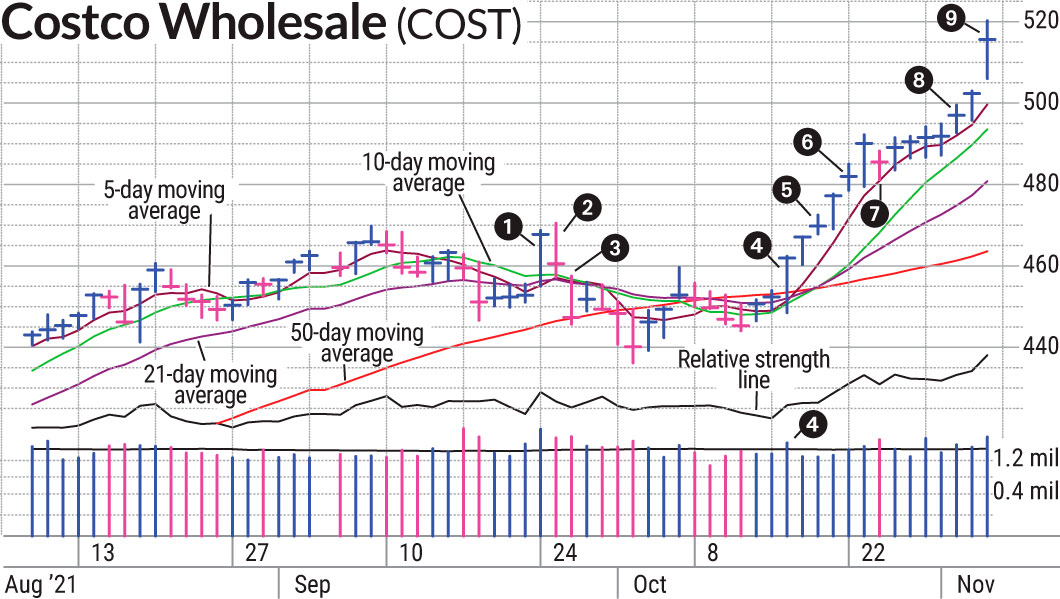 The stock market really picked up steam in the last couple of weeks. But as the Nasdaq composite posts its 10th consecutive daily gain, a pause seems likely. As a result, our swing trading strategy of selling into the strength is kicking in for individual stocks like Costco stock.

Costco (COST) is another example of a stock that worked on our second try (the last two columns focused on this topic with Lithium Americas (LAC) and Sea Limited (SE).)

Costco stock joined SwingTrader on Sept. 24 after breaking a downtrend (1). The next day’s downside reversal didn’t look good (2) but held above our stop until the following day when we exited (3).

While Costco stock dropped even further over the next week, it hovered right around its 50-day moving average line. Then a couple days after the follow-through day on Oct. 14, Costco stock moved strongly higher and rejoined SwingTrader (4). Volume was also much stronger than during its most recent pullback. Plus, Costco stock was especially appealing as industry groups in retail looked stronger and it provided some diversified exposure outside of technology.

As the market strengthened so did Costco stock. A couple of days after our entry, it was up 2.5% from our entry and we took our first third profit (5). That might seem early, but Costco stock doesn’t normally move as much. Its Average True Range, a measure how much a stock moves from high to low each day, was only 1.6%.

After a couple more days, Costco stock hit a 5% gain from our entry (6). We took another third of profit with the intention of giving the remaining position more room to run.

The one down day Costco stock had (7) was actually very constructive. It remained an inside day (the high was lower and the low was higher than the previous day), got support at its 5-day moving average line and closed in the upper part of its trading range. Not really much to worry about there.

In fact, Costco stock ended up being an easy hold as it continued getting support at its 5-day moving average line with small gains over the next few days.

Then Costco stock started to pick up the pace (8) at a time when the market also extended its gains. Our final exit came on Nov. 4 as Costco stock rose more than 2.5% for the day (9). Why sell when things are going so well? It was based on history.

Costco stock tends to pull back after getting extended above its 50-day moving average line. The most instances of a pullback for Costco stock come at 9% and 10% above the 50-day line (83% of them since 2009). With the Nasdaq composite approaching its own extended levels and Costco above historically extended levels (more than 11% above the 50-day), it seemed like a good time to book the gains. That doesn’t mean it can’t go higher first, but with a pullback more likely we can wait for another chance.

More details on past trades are accessible to subscribers and trialists to SwingTrader. Free trials are available. Follow Nielsen on Twitter at @IBD_JNielsen.

Want To Know When An Uptrend Starts? Track Daily Stock Market Action With The Big Picture