Like many Indian women, Paridhi Mundra, 25, refused to learn how to cook. Mundra was of the opinion that cooking was inflicted as part of a wife’s marital duties, and resisting to learn it meant resisting patriarchy itself. In the pandemic, however, she realised that cooking can mean so much more. “Food builds communities and it’s one of the ways by which generational knowledge is passed down,” she says.

Mundra’s transition from resisting cooking to owning it are presented in a nutshell as a zine, titled 4 Daane Shakar: some thoughts on food, ancestral history & collective care. Made of cheap, delicate papers that Mundra picked mainly for their texture, the pink-orange zine presents cooking as experienced in domestic spaces rather than at culinary school. Hand gestures show measurements, such as two-thirds of a forefinger for a teaspoon or a fist for 3/4 cup — gestures we may have seen our mothers and grandmothers use all the time.

The zine costs Rs 100 and, like all the other artists at the ongoing Bombay Zine Fest, Mundra isn’t making zines with a business model in mind. Unlike art prints, postcards, posters or even stickers, whose purposes are more or less established, a zine’s destiny is less defined. A zine can have words or images or both. It is a book but it is also a book-object, which you cherish it for its craft as much as its content. It’s usually DIY, or at least the best ones are, and has the appeal of something that was made in a workshop. 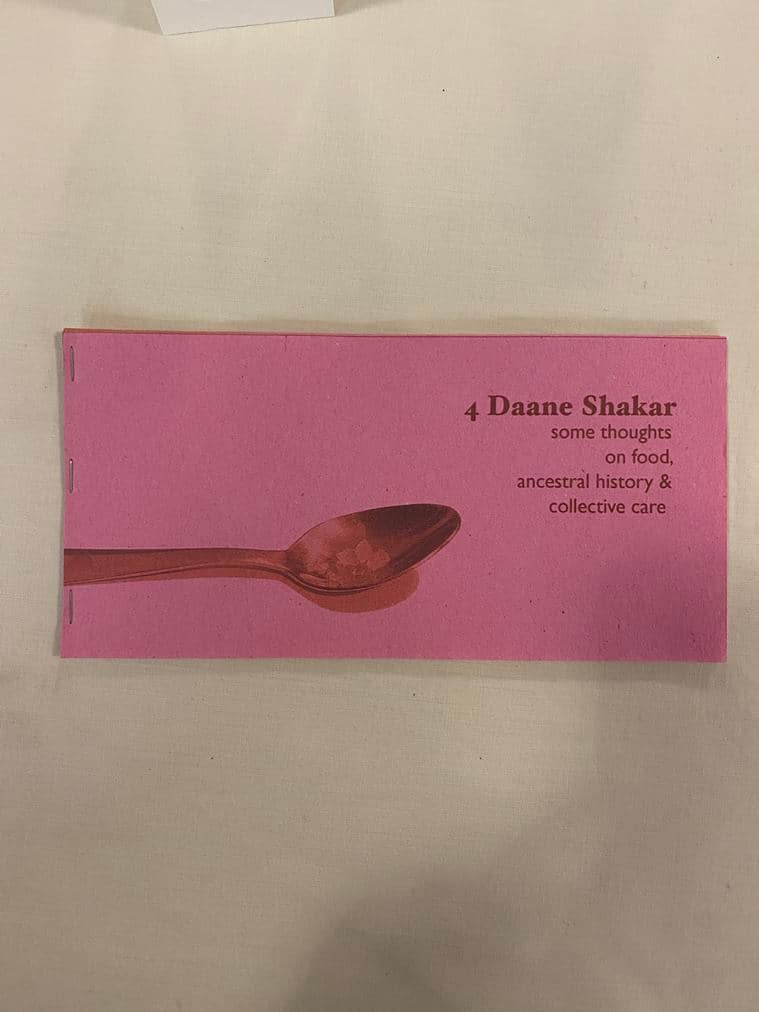 The Bombay Zine Fest, an initiative by independent zine publishing platform Bombay Underground, has brought together dozens of artists, designers, illustrators and architects who have made zines alongside their commercial practices. Hemant Basankar, 53, is a Mumbai-based graphic designer and visual artist, whose zine, titled The point of least distance, can only be best described as snatches of childhood memories. While the visuals don’t lead up to an exact plot, there are moments that are sure to resonate with audiences—the childhood “magic trick” of the detachable thumb or a cat curling around father’s leg as he reads the newspaper. Filmmaker Shivani Vyas’s zine Ek Bombay Sandwich! pays tribute to a sandwich-wallah from Wadala; graphic designer Humera Khan’s zine decodes Freedom of Speech; architect collective Archv’s colouring book-zine takes parts of a poster that looks at interventions for animals in urban spaces, made by member Nayan Mote. Several other zines take on the phases of the moon, eating disorders and sex—just about any theme imaginable. 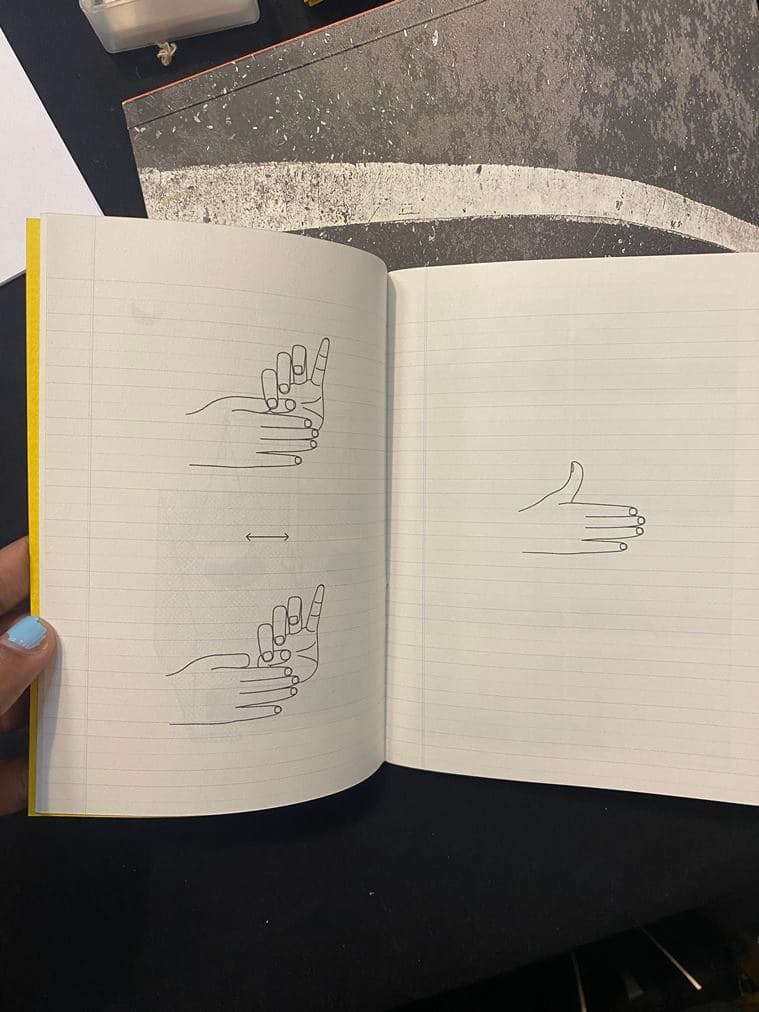 Artist Aqui Thami, who co-founded Bombay Underground with Himanshu S in 1999, also has their zines for browsing and for sale at the zine fest. Thami’s new zine, titled Himal, pays homage to her Himalayan ancestry and indigenous practices which consider animals, trees and mountains as related to humans—a perspective that may well be remembered in this climate emergency. Thami says that as an indigenous woman, she is interested in looking at other ways of knowledge-making, knowledge-keeping and art in her practice.

Bombay Underground started its zine fest in 2017. The last edition was held in 2020, just before the pandemic hit. After nearly two years of getting quickly accustomed to virtual shows and marketplaces, the zine fest is a reiteration of the joy of communities coming together in person. The internet, for all its benefits, can be an exclusionary space in India, but a zine, on the other hand, can be for everyone. “You don’t have to be literate to engage with the work. There are lots of images. The idea with the fest is to be with people and have people who make zines together,” she says. 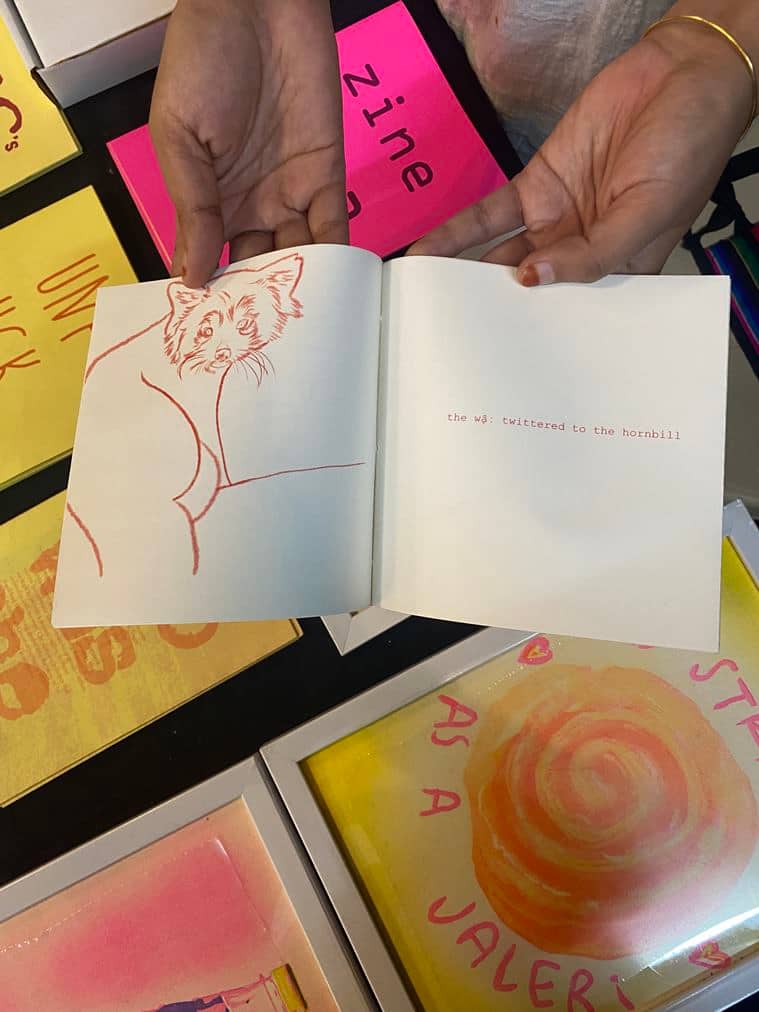 Himal, made by Aqui Thami, co-founder of Bombay Underground, is a little tale about the interconnectedness of animals, humans and landscapes. Thami says that as an indigenous woman, she is interested in looking at other ways of knowledge-making, knowledge-keeping and art in her practice. (Credit: Benita Fernando)

Artist Koshy Brahmatmaj, 29, takes on the rather stressful world of online dating in Cupid love notes, where screenshots and messages from potential suitors fill the pages. Their remarks are funny or uneasy, but some are downright rude and sexist. Brahmatmaj made the zine in 2019, when she was single after four years and was swiping on dating apps. One of her matches, she recalls, asked her if she would move to Australia with him. “He just wanted a wife, I suppose,” she says.

Her latest zine is Mend It!, which encourages practising sustainable fashion and the dictum that the most sustainable piece of clothing is the one that you already own. In effect, Mend It! is a booklet with basic stitches that undermines fast fashion. It runs parallel to the idea of making zines—they are usually handmade, they can make do with scraps of paper, and they come straight from creators to collectors. A zine by Humera Khan decodes Freedom of Speech and restrictions placed on it. (Credit: Benita Fernando)

While it seems like zines are a niche collector’s item in the design community today, we are surrounded by zines more than we notice. Pamphlets on sex education, furniture assembly, or using an espresso machines—they are all zines of some kind. Zines have historically also been popular with science-fiction collectives, communist parties, feminist groups and resistance movements. 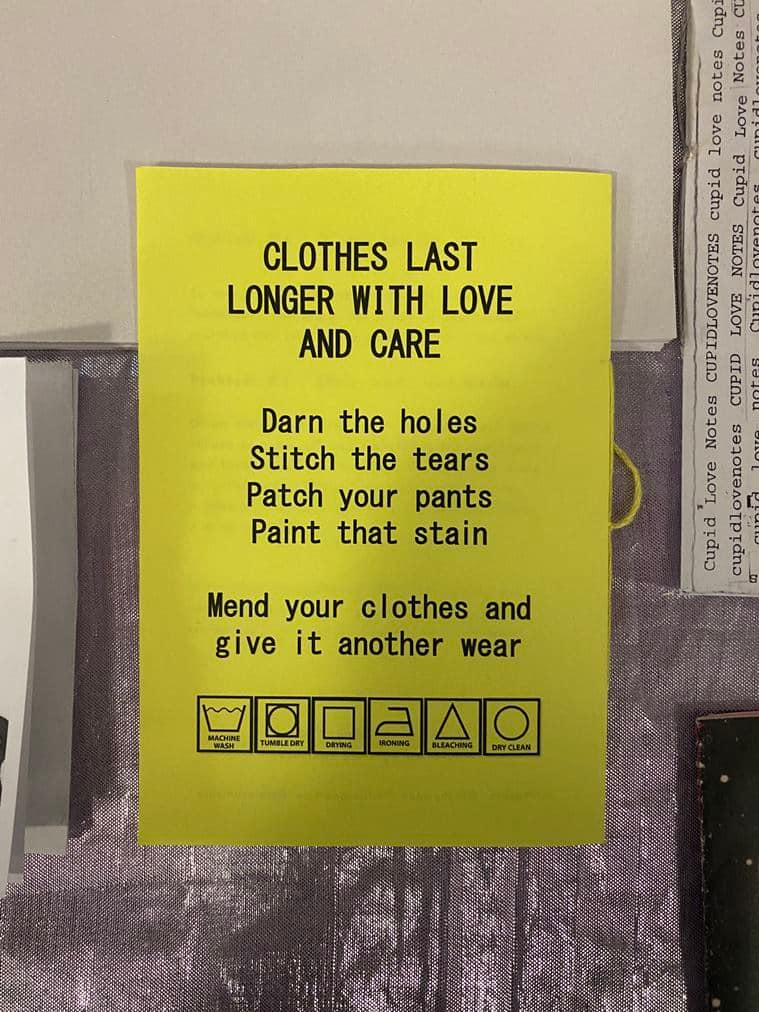 Zines can be an easy way to disseminate information and we are surrounded by zines more than we notice. Such is the case with Koshy Brahmatmaj’s zine on sustainable fashion, titled Mend It!, where she teaches basic stitches to darn and mend clothes. (Credit: Benita Fernando)

“Zines are an unconventional, informal way of imparting education. They are not state board textbooks but they are modes of proliferating information… Before social media, this is how they did it,” says illustrator Priyanka Paul, 23. She cites the case of Dr BR Ambedkar, whose writings initially weren’t picked by leading publishing houses. “There is the hegemony of the upper caste, which is why this informal publishing is important. I am thinking of Samta Kala Manch (a Dalit cultural group), which sings and publishes books. They are calling them books, but they are Ambedkar’s writings that they are self-publishing. It’s a non-censored way of putting out information.” 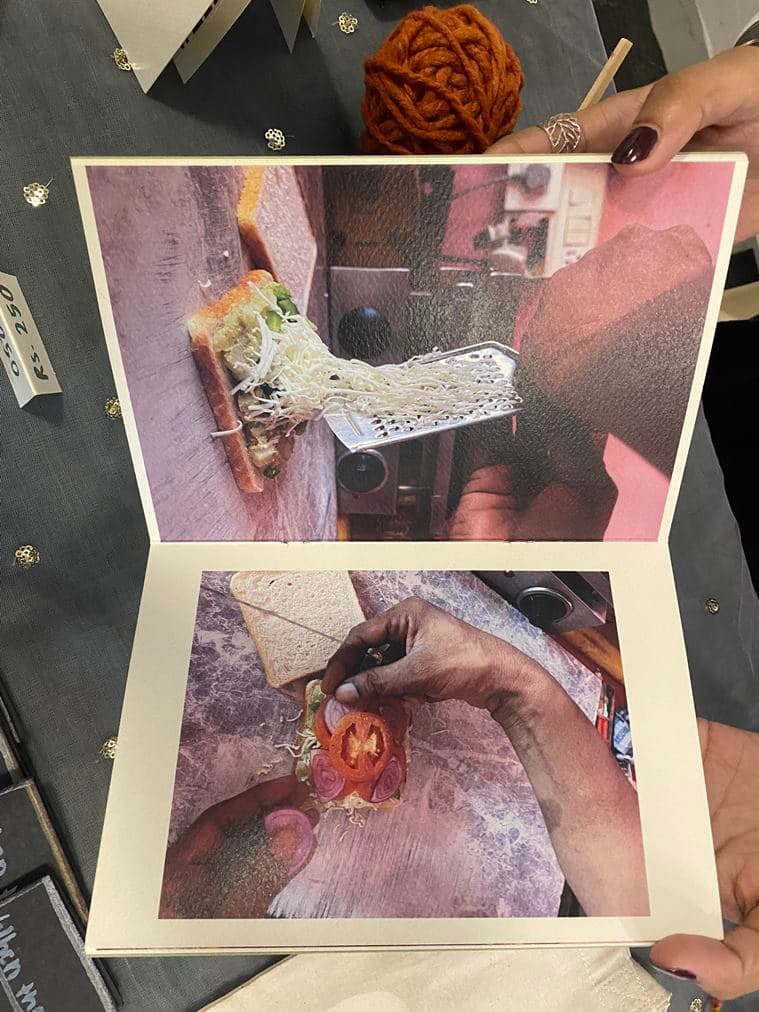 Bombay Underground’s Thami is also the founder of Sister Library, a nomadic library focused on women’s voices. Her latest zine under the Sister Library title curates selections from the writings of Black feminist, Audre Lorde. Not everyone can afford Lorde’s published works and this zine, made in Sister Library’s pop pink, is one way of disseminating selections. 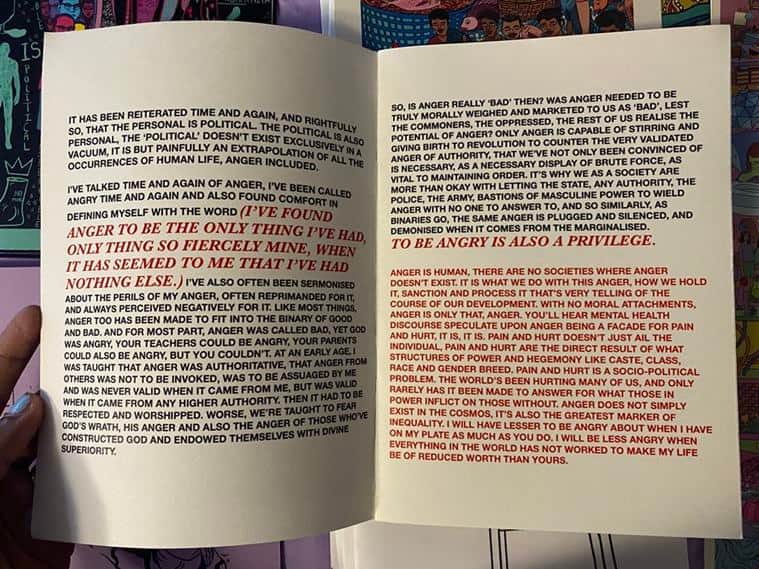 A zine on anger and resistance by artist Priyanka Paul. “I love zines. It’s cathartic—just sitting down with a book and creating something with your hand. Everything here was touched by me. It’s stuck or stapled by me. I love going to the printer and I love paper. All of this makes you an artist as a whole,” she says. (Credit: Benita Fernando)

The prices of the zines, ranging from Rs 50 to Rs 700, can baffle first-time visitors. Can a thin booklet, made of unexceptional paper and sometimes just stapled together, warrant these prices, especially in capitalist consumer culture where a high street t-shirt costs less than Rs300? For zine makers, it’s an even tougher challenge because the market is niche and visitors are more than happy to flip through zines in a matter of minutes, if not seconds, without committing to buying them. Thami says, “Zine making is a lifestyle choice. It’s a political choice. You can’t scale it, there is the DIY ethic and you have to talk about your work. You can’t become a millionaire making zines.”