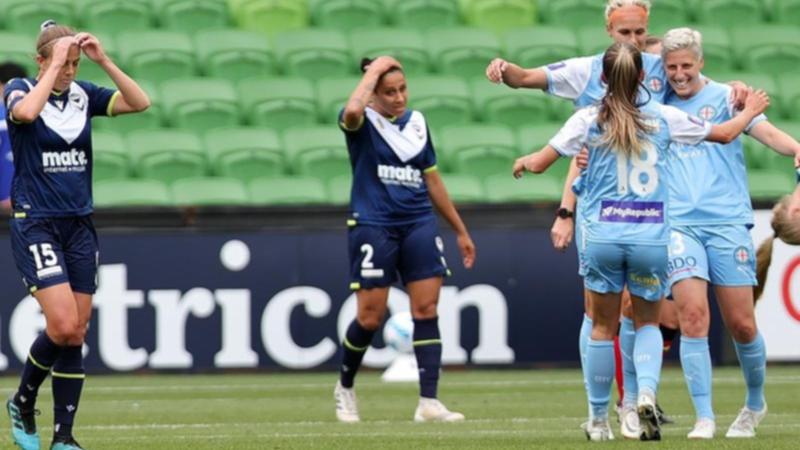 Striker Hannah Wilkinson has scored five goals, including a 26-minute hat-trick, to propel Melbourne City to a 5-1 derby thrashing of Melbourne Victory and leap to the top of the A-League Women golden boot race.

City were chasing redemption after suffering a 2-1 loss in round two and cut Victory up at will with their speed and guile, particularly via Holly McNamara, while pouncing on the champions’ defensive errors.

In the process, New Zealand international Wilkinson became only the second player to score five goals in an ALW game, after Kate Gill’s haul for Perth Glory in 2014, while City leapfrogged Victory into second behind Sydney FC.

Victory haven’t kept a clean sheet since skipper and centre-back Kayla Morrison ruptured her ACL in round one and that trend continued when Wilkinson opened the scoring in the fifth minute.

Centre-back Tiffany Eliadis sent a clearing header straight to McNamara, who charged forward then slipped it to Wilkinson to coolly finish past Victory goalkeeper Casey Dumont.

In the 13th minute, Dumont attempted to clear Claudia Bunge’s backpass but hit it straight into McNamara.

The ball deflected to Wilkinson, who took a touch then swept home a lovely long-range strike.

A calamitous mix-up handed City their third 13 minutes later, with Eliadis and Dumont getting in each other’s way in attempting to handle Emma Checker’s long ball.

Wilkinson pounced on the loose ball and coolly sealed her hat-trick.

City added a fourth on the counter in the 56th minute, with McNamara lifting a ball over Victory’s defence for Wilkinson, who chipped Dumont.

In the 75th minute, Tyla-Jay Vlajnic teed up Wilkinson to tap home her fifth goal, and her seventh for the season at the back post, sending her four goals clear of Victory’s Catherine Zimmerman in the golden boot race.

City kept Zimmerman and Lynn Williams goalless and Alex Chidiac and Kyra Cooney-Cross quiet, but Victory snatched a late consolation when Chidiac slipped through Maja Markovski to score her first league goal in the 84th minute.