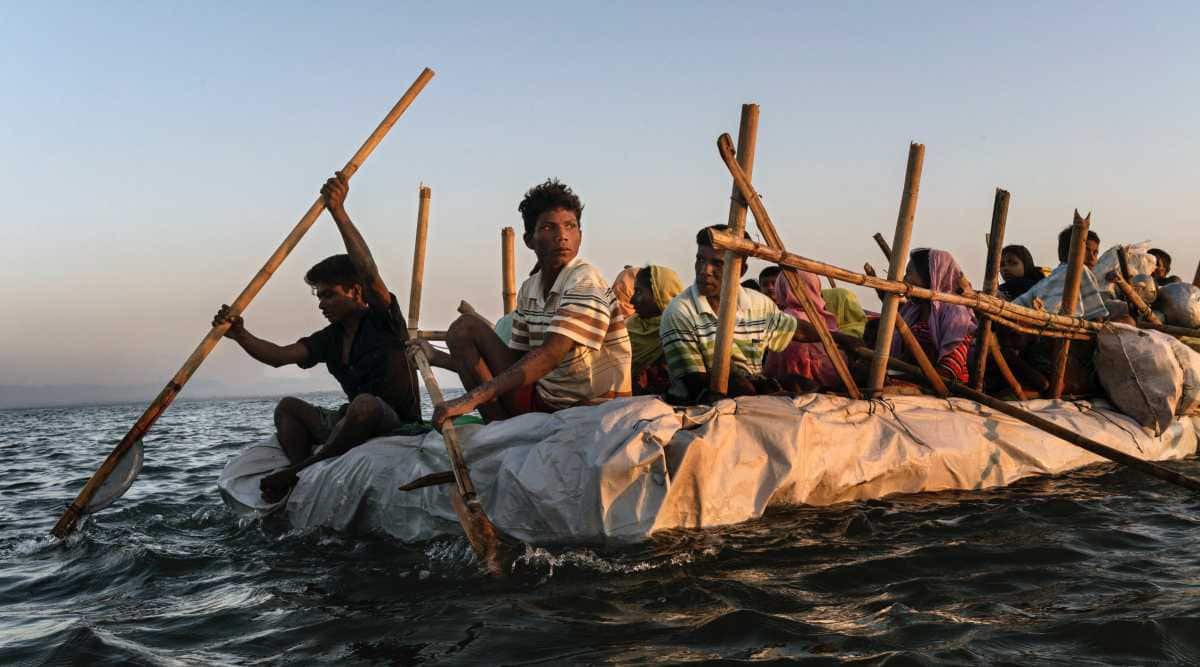 Three years ago, the Kyaw Thaung family partied at the Pegu Club. The venerable Burmese Irish clan had restored the teak-lined establishment to its 19th-century glory. The Pegu Club project befitted the family’s East-meets-West positioning and the optimism of a country newly engaging with the world.

As Myanmar’s military dictators ended decades of isolationism, the Kyaw Thaungs seemed to embody the perfect mix: an august family with a long history of charitable giving that was committed to the kind of business reforms needed to coax a corrupt, closed country into the global economy. But the main source of the family fortune, purported vaguely to be from property and import-export companies, was concealed behind a facade.

For all their efforts to differentiate themselves from the drug lords and business cronies who dominated Myanmar’s economy, the Kyaw Thaungs were quietly equipping one of the world’s most brutal militaries. Their partnership with the Tatmadaw, as the Myanmar military is known, deepened even as its generals committed ethnic cleansing against Rohingya Muslims. And it continued into this year, when the army staged a coup and seized full power of the country, killing more than 1,300 civilians so far, in the estimate of a monitoring group.

Jonathan Kyaw Thaung, the scion, was the public face of the family. As he chased Tatmadaw contracts, he hobnobbed with the family of Senior Gen. Min Aung Hlaing, the military chief who orchestrated the coup. He met with the Myanmar air force commander at the 2015 Paris Air Show, where the military leader checked out Pakistani fighter jets that ended up in the Tatmadaw’s arsenal. A Kyaw Thaung family business bid to help supply the military with spare parts for Russian attack helicopters that have been used to strafe civilian populations resistant to the coup.

Even the renovation of the Pegu Club depended on a deal in which the Kyaw Thaungs had to pay at least $510,000 a year to a military conglomerate, the agreement for the club shows.

An investigation of the Kyaw Thaung family by The New York Times — based on interviews with dozens of former company employees, business associates, military insiders and family members, as well as thousands of pages of corporate filings, contracts, tenders and other financial documents — exposes a vast web of military procurement that was strategically hidden from the public. The family, best known for its charitable foundation, was profiting from its close ties to the Tatmadaw and helping the military avoid scrutiny by Western governments.

At cocktail parties and business forums, the family talked up international business standards, like rigorous governance, corporate social responsibility and open tenders. Behind closed doors, the Kyaw Thaungs, charismatic, Western-educated and English-speaking, relied on the kind of insider deal-making with the Tatmadaw that has enriched an entire class of cronies in one of Asia’s poorest and most repressive nations.

Ultimately, the story of the Kyaw Thaungs parallels that of Myanmar: a country of vast potential foiled by a ruthless military and the families willing to compromise themselves in pursuit of its riches.

The Kyaw Thaungs capitalized on their family ties to secure lucrative contracts supplying the military with European aircraft and a French coastal surveillance system. They bid for a deal to provide Italian guns to the navy, according to a former company employee and an email discussing the offer. A relative, a former general who served as both energy minister and the chair of the national investment commission, formally approved deals that Kyaw Thaung companies made with military-linked businesses or with the military itself.

To obscure the real font of their wealth, they set up a tangle of companies in jurisdictions ranging from the British Virgin Islands to Singapore. Some of these opened and closed with a single deal, and they depended on ownership structures that at times masked the involvement of family members.

Some of the family’s military procurement was devised to evade Western export controls meant to prevent the Tatmadaw from strengthening its command, according to international sanctions experts and five former company employees. The coastal radar technology, for example, could have run afoul of such rules; it was operational when Rohingya Muslims tried to escape a military massacre that United Nations investigators say could constitute genocide.

One of the family’s companies donated more than $40,000 to the Tatmadaw for what the United Nations described as a cover-up of the site of ethnic cleansing. A 2019 U.N. report on the military’s persecution of the Rohingya highlighted that contribution.

In interviews, Jonathan Kyaw Thaung, 39, denied impropriety, saying his relations with the military were no more than any business operating in Myanmar. He said his relatives, his father included, did not supply military equipment to the Tatmadaw and said other families were the country’s real arms dealers.

The Kyaw Thaungs grew up as part of a comfortable, well-connected set that was protected as Myanmar’s generals turned the country inward.

The family’s initial fortune came from jute, a natural fiber that is used to make rope and twine. The jute mill was nationalized during the military’s disastrous venture into socialism after its first coup in 1962.

Burma, once lauded for its fine schools and polyglot cosmopolitanism, sank into penury. The ruling junta renamed the country Myanmar.

Jonathan Kyaw Thaung’s father, Moe Kyaw Thaung, was sent to Northern Ireland, where he escaped Myanmar’s privations. His siblings scattered to Thailand, Singapore, the United States and Britain. The family’s graceful villa in Yangon moldered, as did the rest of the country.

But even as many of them headed abroad, the family remained connected to Myanmar and traveled there to do business. Their path back was eased by the extended family tree, which included high-ranking Tatmadaw officers, Cabinet ministers and confidants of junta chiefs.

A cousin married Zeyar Aung, an urbane, English-speaking general who led the Northern Command and the 88th Light Infantry Division, both of which the United Nations has tied to decades of war crimes against Myanmar’s own people.

Myanmar’s patronage networks are a tangle of roots that bind family trees. Generals’ children tend to marry within tight circles, perhaps to other military progeny or the offspring of business cronies.

As the Tatmadaw began loosening control over the economy, engaging in a fire sale of assets that had once been the military’s fief, that elite class of the well-connected swooped in to profit. Jonathan Kyaw Thaung returned to Myanmar, along with siblings and cousins who had also been raised overseas.

In September 2017, with the violence against the Rohingya provoking international alarm, Ky-Tha, Moe Kyaw Thaung’s business group, arranged a meeting between a representative of Safran, a Paris-based aviation and defense manufacturer, and top officers of the Myanmar air force, according to a leaked document provided by Justice For Myanmar, a watchdog group that investigates Tatmadaw business dealings. The meeting centered on Tatmadaw helicopters, including the Russian-made MI-17, a gunship deployed against the Rohingya and other ethnic minorities.

Safran declined to comment. It is unclear whether the discussions led to a servicing deal. Jonathan Kyaw Thaung said he had never heard of Safran.

Flying Under the Radar

The European-made helicopter appeared destined for the Myanmar oil and gas industry.

But the $2.16 million helicopter on sale in Brazil was not meant for commercial purposes, as a Kyaw Thaung contract indicated. It ended up with the Tatmadaw, the true recipient hidden behind falsified paperwork.

At one point, Myanmar’s Department of Civil Aviation wrote in a letter to Brazilian authorities that the aircraft would be used for “Tourism and Oil and Gas industry.” The letter was based on drafts with handwritten annotations provided by the KT Group, according to the foreign employee and copies reviewed by the Times.

A Tatmadaw officer was listed as a customer on separate internal paperwork for the helicopter, which was reviewed by the Times.

A letter from MWG, a Kyaw Thaung aviation company, requesting visas for six Brazilian crew members to enter Myanmar to deliver the helicopter was addressed not to civil aviation authorities but to the commander in chief of Myanmar’s air force. The letter, which was also reviewed by the Times, specified that MWG would be handing over the Eurocopter to the air force.

When the foreign employee and the Brazilian crew arrived in Myanmar, he said they were met on the tarmac by about 20 men in blue uniforms who swarmed the helicopter, marveling over its features. The employee said he confronted Jonathan Kyaw Thaung when he returned to Myanmar, expressing discomfort at the deception.

Jonathan Kyaw Thaung declined to comment on the deal.

In 2015, the Singapore branch of a Kyaw Thaung company signed a deal to supply the Tatmadaw with a coastal radar technology system made by Thales, the weapons maker partly owned by the French government. The sales agreement for the surveillance system, called the Coast Watcher 100, was part of the leaked documents provided by Justice For Myanmar.

The Coast Watcher 100, which spanned a long coastline, required towers 50 meters high affixed with state-of-the-art radar. A British radar expert, who had worked on projects for Thales in Afghanistan and Iraq, was brought in to direct the project. A French former defense attaché was hired as a general manager for international business development and now works at Thales.

As the Rohingya crisis intensified, the Coast Watcher 100 was operational on Myanmar’s western flank, which became the site of the world’s fastest exodus of refugees in a generation.

The Tatmadaw swept through Rohingya villages, killing and raping civilians. To escape, Rohingya piled onto rickety boats. The Tatmadaw caught craft after craft.

In September 2017, during the frenzy of the Rohingya crisis, the Kyaw Thaung company arranged for Thales representatives to meet with senior officers of the Navy, another leaked document provided by Justice For Myanmar shows.

In a statement to the Times, Thales said that it “does not sell defense systems to Myanmar.”

Jonathan Kyaw Thaung denied any knowledge of the Thales system.

It is not clear whether the Coast Watcher 100 was specifically used for tracking the Rohingya. But the system, which can pick up the presence of a small raft, had clear military applications during the exodus of refugees.

Maintenance of the Coast Watcher 100 continues. Leaked defense budgets for 2020-21 show allocations of more than $160,000 for servicing the radar system. The previous year, $120,000 was spent for the same purpose, a record of foreign currency transactions shows, part of the trove from Justice For Myanmar.

Such outlays most likely contravene the European Union trade embargo on the Tatmadaw that targets equipment that might be used for repression, said Siemon Wezeman, a senior researcher at the Stockholm International Peace Research Institute and an expert in Tatmadaw procurement. The trade ban was strengthened in 2018 after the Rohingya massacres, cracking down on so-called dual-use products with either civilian or military purposes.

“The Rohingya are a coastal group, and automatically anything that is checking coastal waters would be for checking for movement of the Rohingya and might be used for repression, end of story,” Wezeman said, referring to the Thales surveillance system.