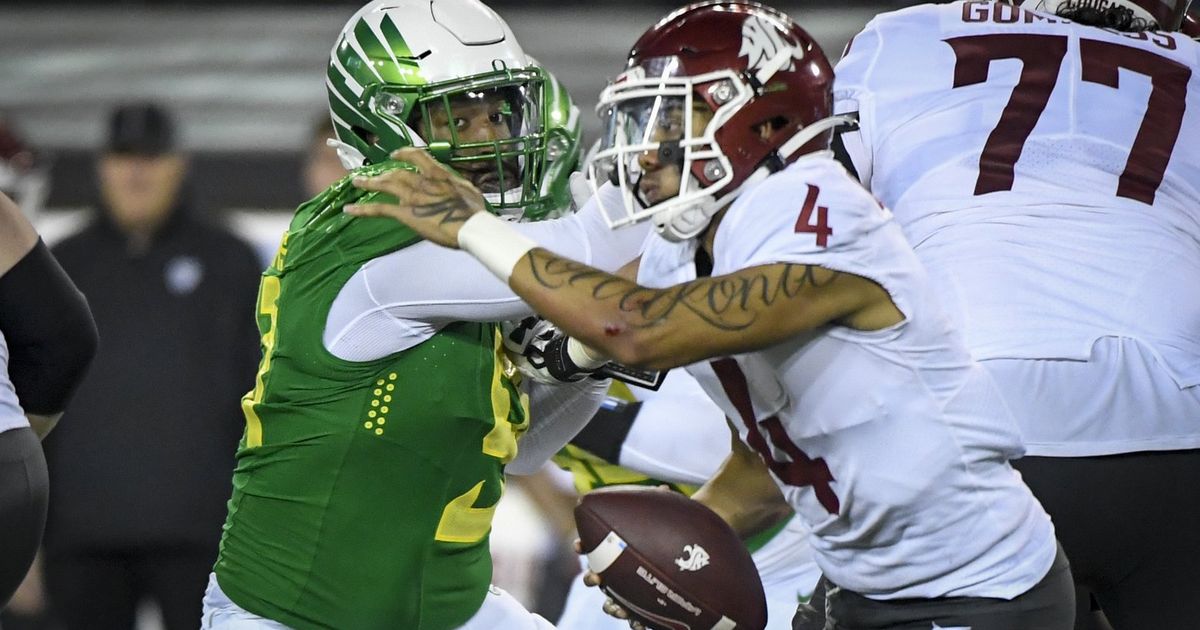 EUGENE, Oregon — In the end, Washington State didn’t pack the wallop required to stun Oregon, an opponent that hadn’t lost at its home venue in 17 games and entered this one ranked third in the College Football Playoff picture.

But the Cougars made the Ducks sweat a bit during Saturday’s 38-24 decision at Autzen Stadium. Interim coach Jake Dickert said WSU can take pride in its “resolve” and “togetherness.”

While it represented a big opportunity missed, the Cougars’ loss does not sink a season that’s already gone better than many expected. At 5-5, their bowl prospects look fine with matchups against one-win Arizona and rival Washington — which fired its coach Sunday — around the corner.

Without getting too far ahead of ourselves, let’s wrap up this weekend’s Pac-12 nightcap in the Emerald City.

Battle in the trenches goes to UO

Dickert had emphasized it repeatedly in the week leading up to the game — the line of scrimmage would decide the outcome.

To some extent, it did.

Oregon imposed its will up front early to put the Cougars on wobbly legs and open a 14-point lead, then the Ducks leaned on physicality down the stretch to furnish a buffer and seal the deal.

In its most productive rushing game of the season, UO went to work with straight-up inside zones, challenging the girth of WSU’s defensive front, and the Ducks introduced a healthy mix of options for quarterback Anthony Brown to keep the Cougars guessing during a 306-yard rushing day.

It was the second game in which WSU has conceded 300 or more yards — including 309 versus Oregon State on Oct. 9. The Cougs have permitted over 200 yards in five games.

“I thought we got tired and they wore us down, and we didn’t tackle as well as we could,” Dickert said. “That’s on me. I gotta put our guys in a better position to stop the run. We know they’re running and that’s my No. 1 job.

“We just didn’t get the stops, and it starts with stopping the run on first down. They were always ahead of us on the chains. They’re a challenging team once that happens.”

Owing to their rushing success on early downs, the Ducks converted on eight of 12 third-down attempts. In the second half, they had to gain an average of 4 yards to make the line to gain on third downs.

UO rumbled for 6.5 yards on average on first-down carries and 6.1 when they went to the ground game on second downs. Just six times the hosts were held to 2 yards or fewer on running plays. They surrendered one sack and one tackle for loss.

“It was what we expected to see,” WSU edge Brennan Jackson said. “They’ve got a great scheme over there, puts us in a lot of (difficult) positions to read things and whatnot. Big offensive line, so they were moving bodies in there. With two weeks to prepare, we gotta come out better.”

On the other end, WSU had logged only 52 rushing yards before recording 39 during a meaningless late possession, down 21 with under two minutes left. WSU, which gave up three sacks and three TFL in the run game, was averaging 2.3 yards per carry through three quarters.

Before a 10-yard scamper from Max Borghi on a last-ditch WSU drive late in the fourth — which ended at 3:53 when quarterback Jayden de Laura tossed his second interception — just two Coug runs had gone longer than 10 yards.

For the most part, de Laura had to get the ball out quick.

“They’ve got one of the best D-lines in the nation,” slot Travell Harris said.

De Laura simply wasn’t supplied the time to go through his progressions, load up and step into deep attempts.

“There were times when Jayden couldn’t quite get his feet set and couldn’t let routes develop,” Dickert said. “He was having to … scramble or try to create some plays just based off pressure.

“We were never (able) to get in rhythm in the deep pass game and take the shots we hoped we could. I give our guys a lot of credit — they battled through it. There were some different looks. That’s a heckuva front seven.”

It didn’t help matters that starters at center and right guard in Brian Greene and Cade Beresford did not play.

Greene will be away from the team for an unspecified amount of time because of a “personal situation,” Dickert said.

Beresford was suited up for warm-ups. He had sustained a lower-body injury that kept him out of the second half versus Arizona State two weeks ago. Dickert said Beresford could have been used in an “emergency situation.”

Abraham Lucas’ memorable quote about the Cougars having a “good initial punch, but not really a chin” has resurfaced several times since the standout WSU tackle spoke it Sept. 18 after a 45-14 loss to Southern Cal.

“We’ve just developed that chin, like what Abe said,” noted Jackson after the defeat at UO. “At the beginning of the year, we kinda got punched in the mouth and didn’t respond. But I think now we’re getting some endurance in that regard.”

WSU has displayed an identity of resilience over the past month, meeting challenges after absorbing blows that may have knocked out the early-season Cougars.

On Saturday, the Cougars climbed out of a 14-0 hole, dug in a mostly one-sided first quarter, and tallied 14 straight points in the second period. They deadlocked the score with 11 seconds until halftime.

Midway through the fourth, safety George Hicks III exhibited WSU’s never-say-die attitude when he stripped the ball from Brown at the Cougs’ 1-yard line. Corner Jaylen Watson collected the fumble, racing to midfield to set up an eventual field goal that trimmed the UO lead to seven.

The Cougars couldn’t complete the rally, but the fact they were in striking distance at that late juncture was impressive nonetheless.

“They’re going to keep fighting, keep battling,” Dickert said. “The biggest thing we were looking for in this game was improvement, just progressing and getting our program to keep moving forward. … We’re getting better. We’re still fighting.”

The Cougars had “battled back” in the second quarter, during which they outgained Oregon 137-28 to swipe the momentum going into the break.

UO’s third-quarter surge flipped the advantage right back to the home side.

Duck speedster corner/return man Mykael Wright found a seam on the opening kick of the second half, racing 64 yards through traffic to provide a lift to an Oregon offense that’d been anemic for 15 minutes prior.

“Absolutely,” Dickert said when asked if the third period changed the course of the night, “and I think it started that first drive — they come out and get that short field, and end up punching in a touchdown. It took a little air out of our sails.”

The smooth-running Brown capped his team’s first series of the frame with a highlight-reel dart outside. He left his feet and tapped pigskin to pylon for 6. He piled up 50 rushing yards on the ensuing possession as the Ducks seemed to hurry to the line to offset WSU’s constant rotating on the defensive front.

“We just gotta get out and contain better,” Jackson said. “We gotta stay in our rush lanes and not let him get outside the pocket as much. (Brown) did a lot of good stuff with his legs. … He was able to read where the pressure was coming from.”

UO was forced to settle for a 22-yard field goal after a 13-play, 91-yard drive, but it was enough to fashion a 24-14 edge — adequate breathing room that the Ducks would not squander.

The Cougars were outgained 157-28 in the third and ran nine plays against 21 for the Ducks, who amassed nine first downs compared to the Cougars’ two. UO also rushed for 103 yards and logged 7.5 yards per play in the quarter, keeping possession of the ball for 11:15 against 3:45 for WSU, which punted twice.

“Defensively, we just weren’t able to get stops when we needed and get the offense enough rhythm and time to really get flowing,” Dickert said.

WSU’s first series of the third showed promise after a 10-yard screen reception from Calvin Jackson Jr. and an 11-yard out-route grab from Joey Hobert. The Cougs were nearing midfield, and faced a third-and-7, which was cut to a third-and-2 after the Ducks were tagged with a delay of game.

De Laura fired off target to Jackson on third down from the Cougs’ 49-yard line, and WSU opted to punt on a fourth-and-2. Looking back, it was somewhat of a head-scratching decision considering the visitors’ offense had infrequent opportunities to remain on the field and capture the momentum in the second half.